Not even the worlds northernmost point is protected from climate change. Santa sees the changes with his own eyes as he flies with his sleigh above the world. That's why he decided to become more environmentally conscious and build a new, modern and sustainable house. In order to achieve this, he contacted the engineering company Erichsen & Horgen.

Designing an energy efficient and climate friendly house at the North Pole can be challenging, as it is cold, dark and remote. In order to solve the challenge, Erichsen & Horgen created a building that is optimal in terms of resource circularity, sustainable materials as well as energy and water efficiency. 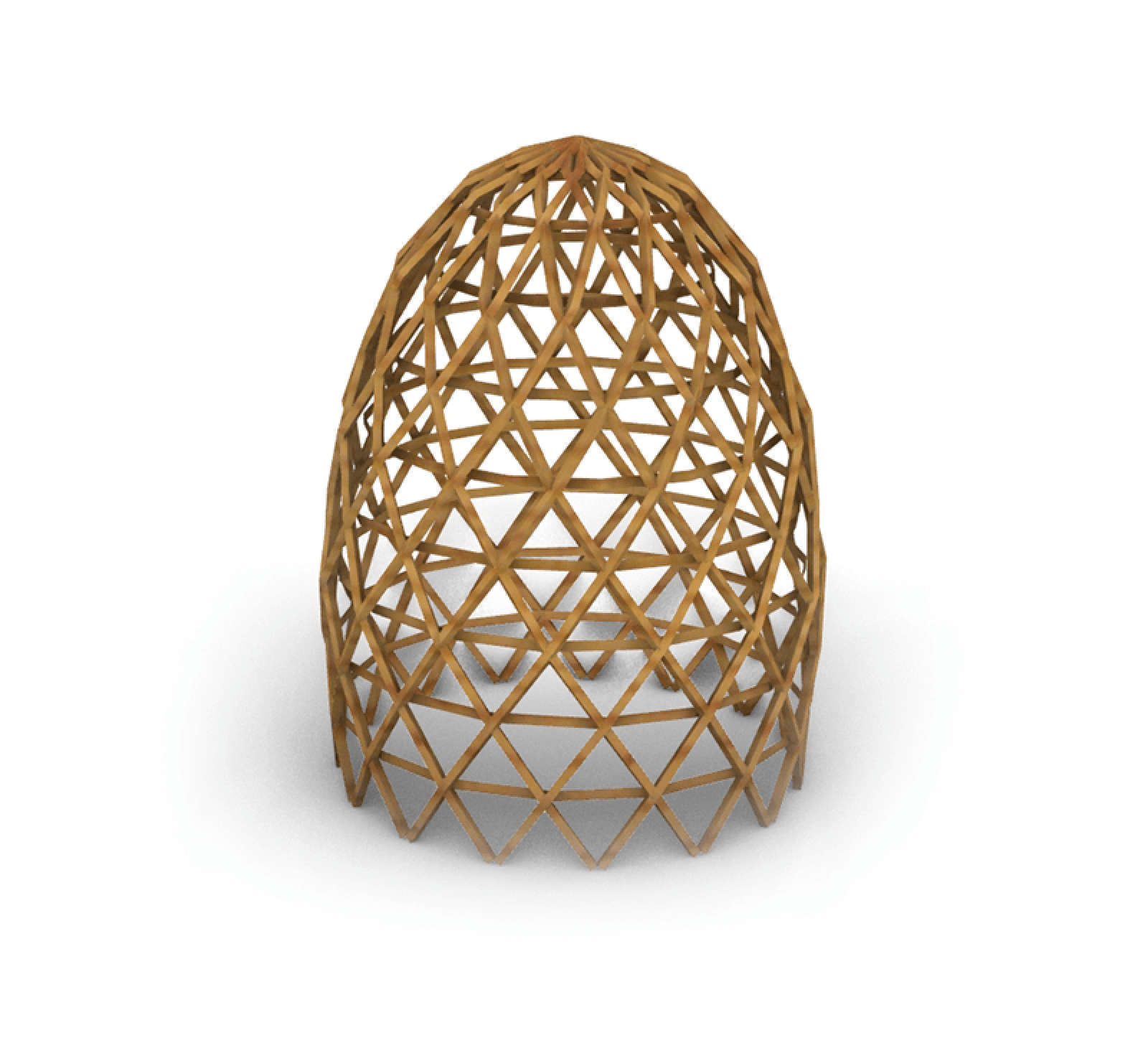 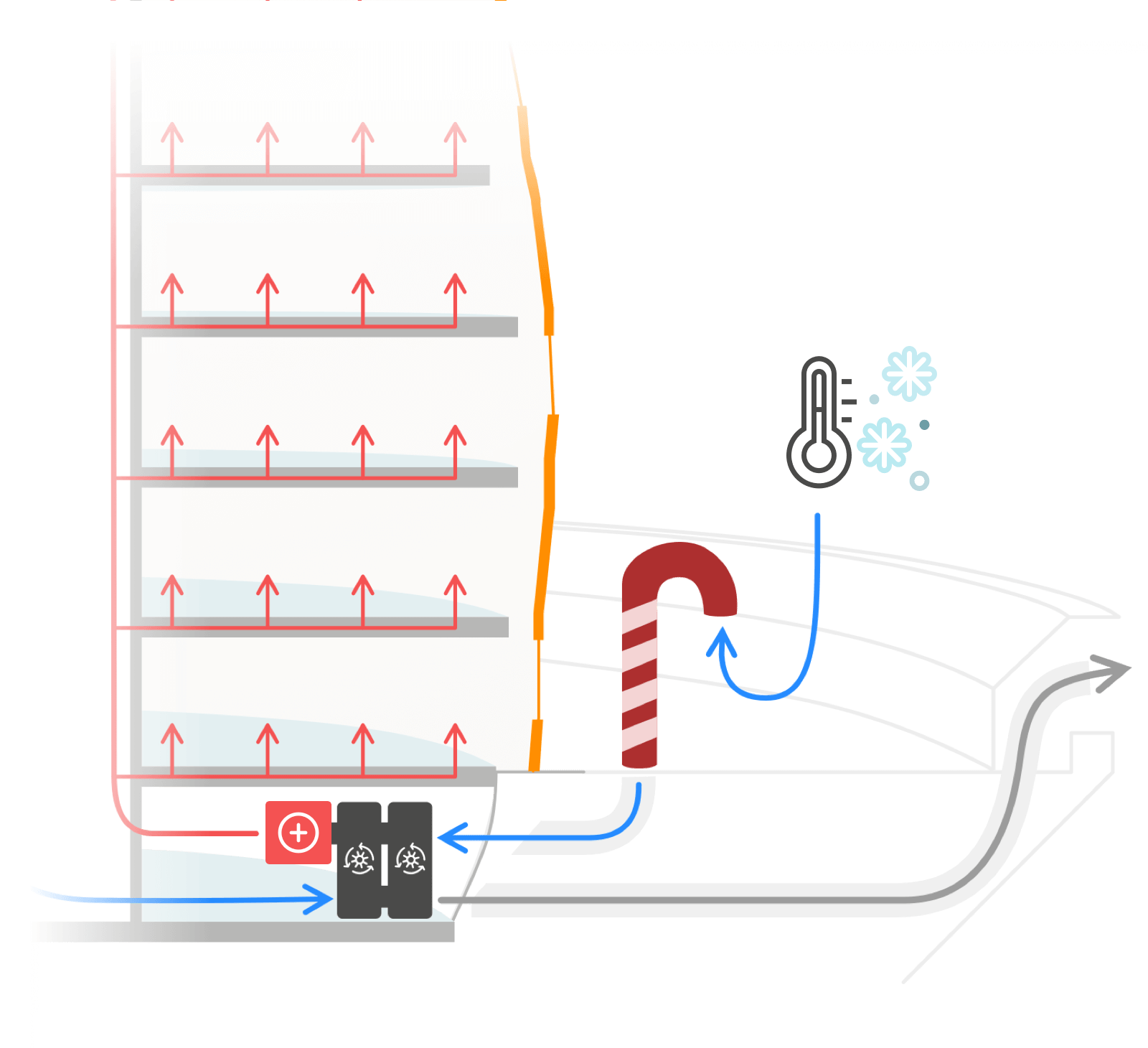 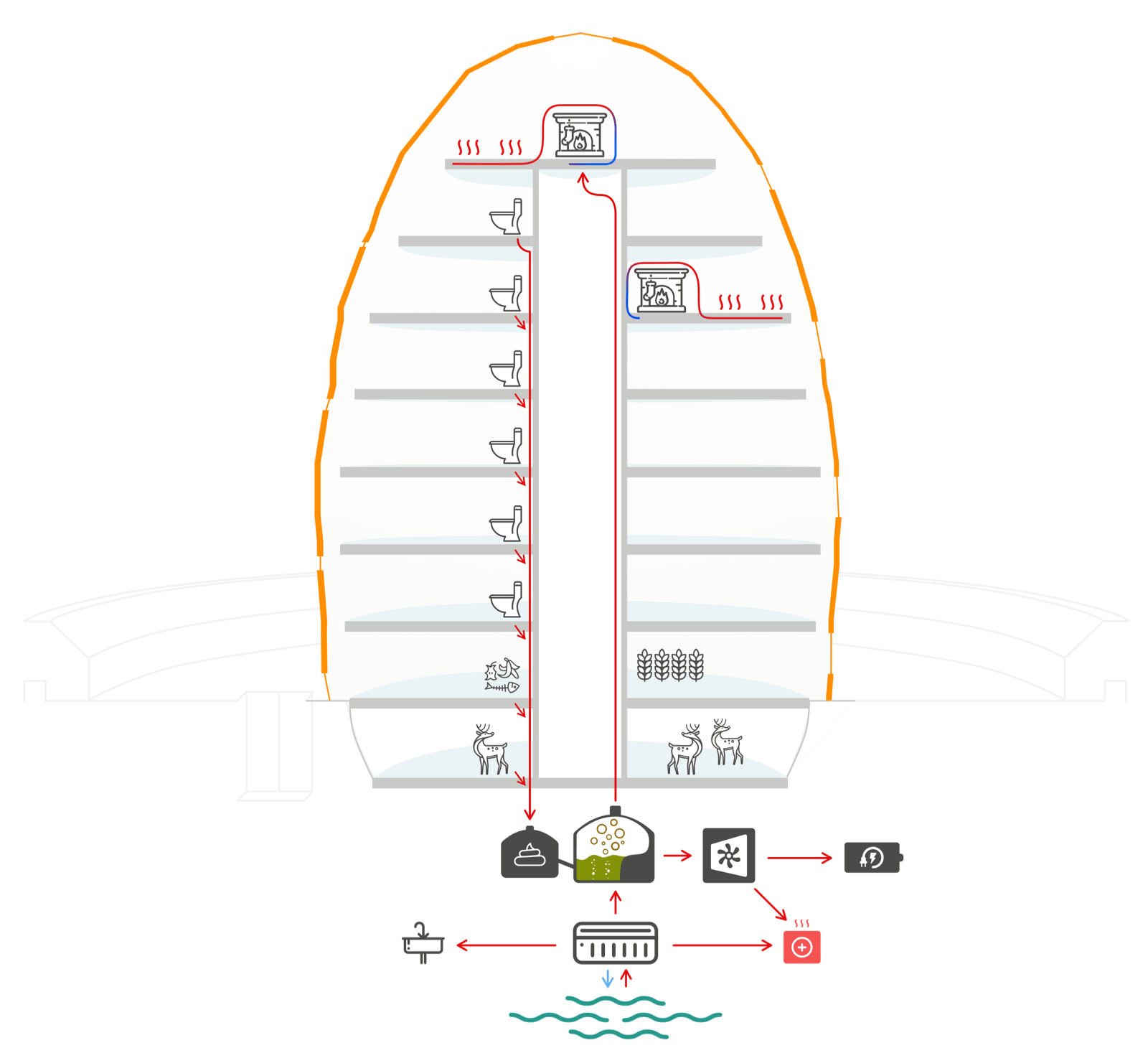 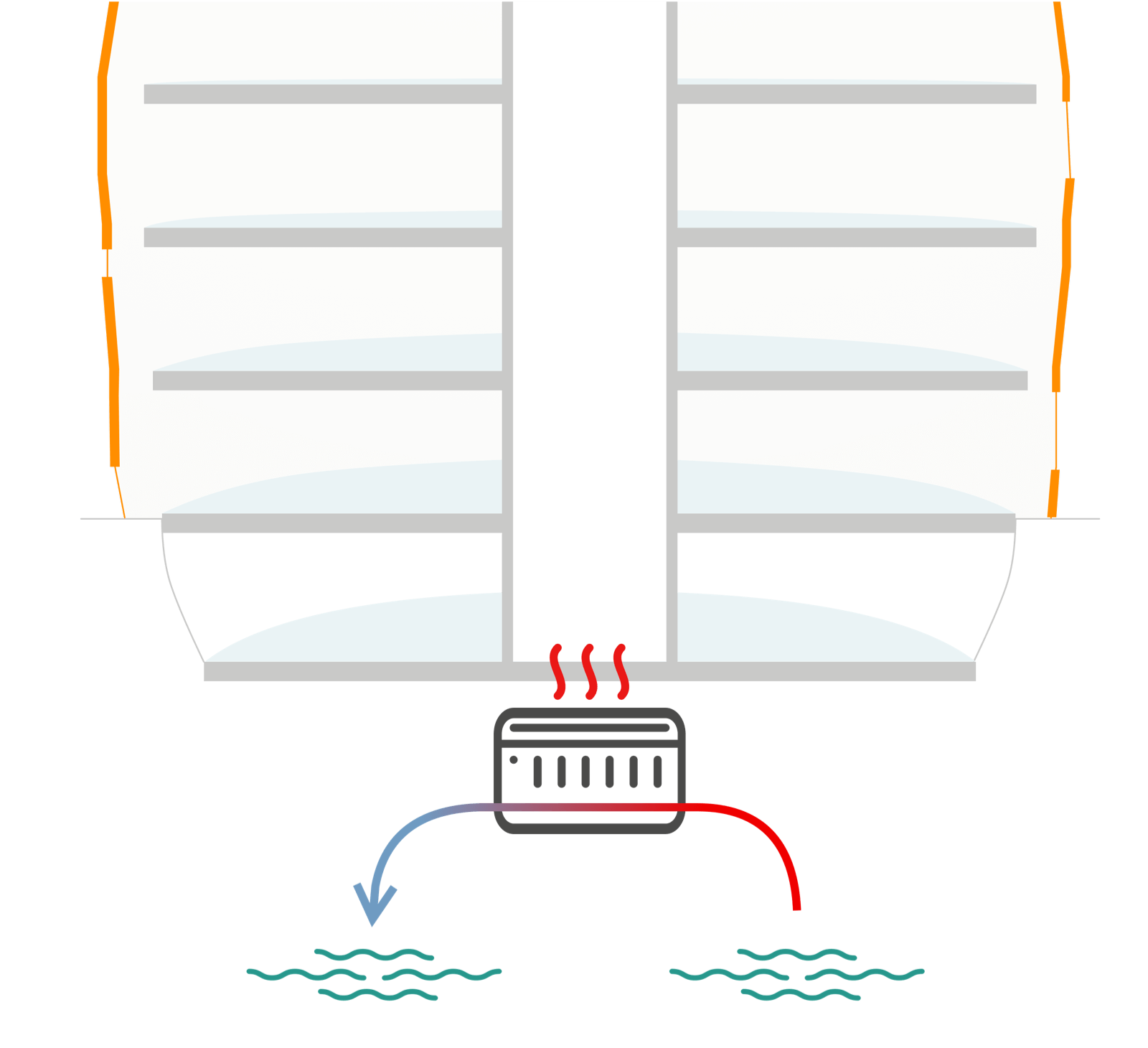 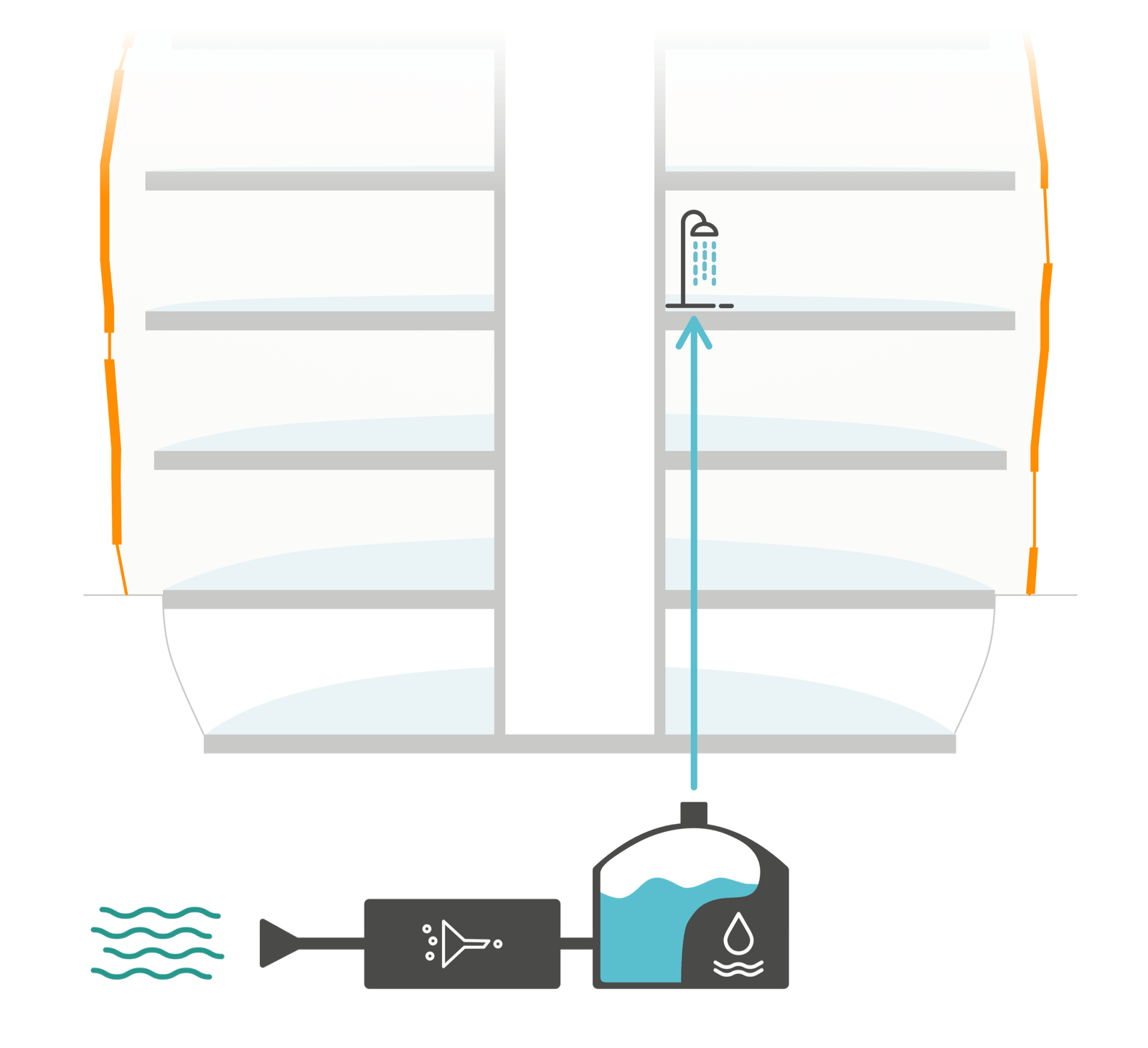 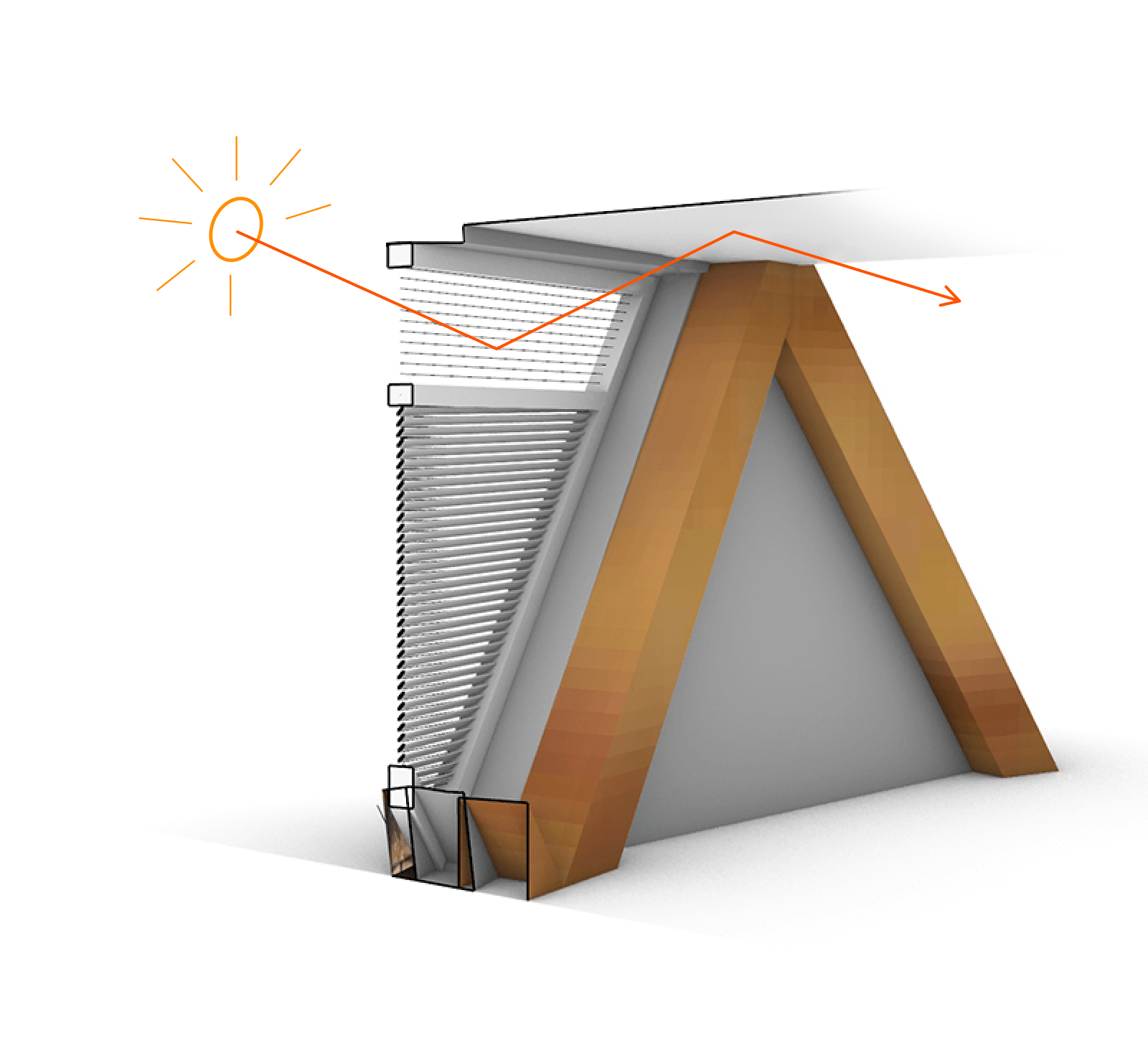 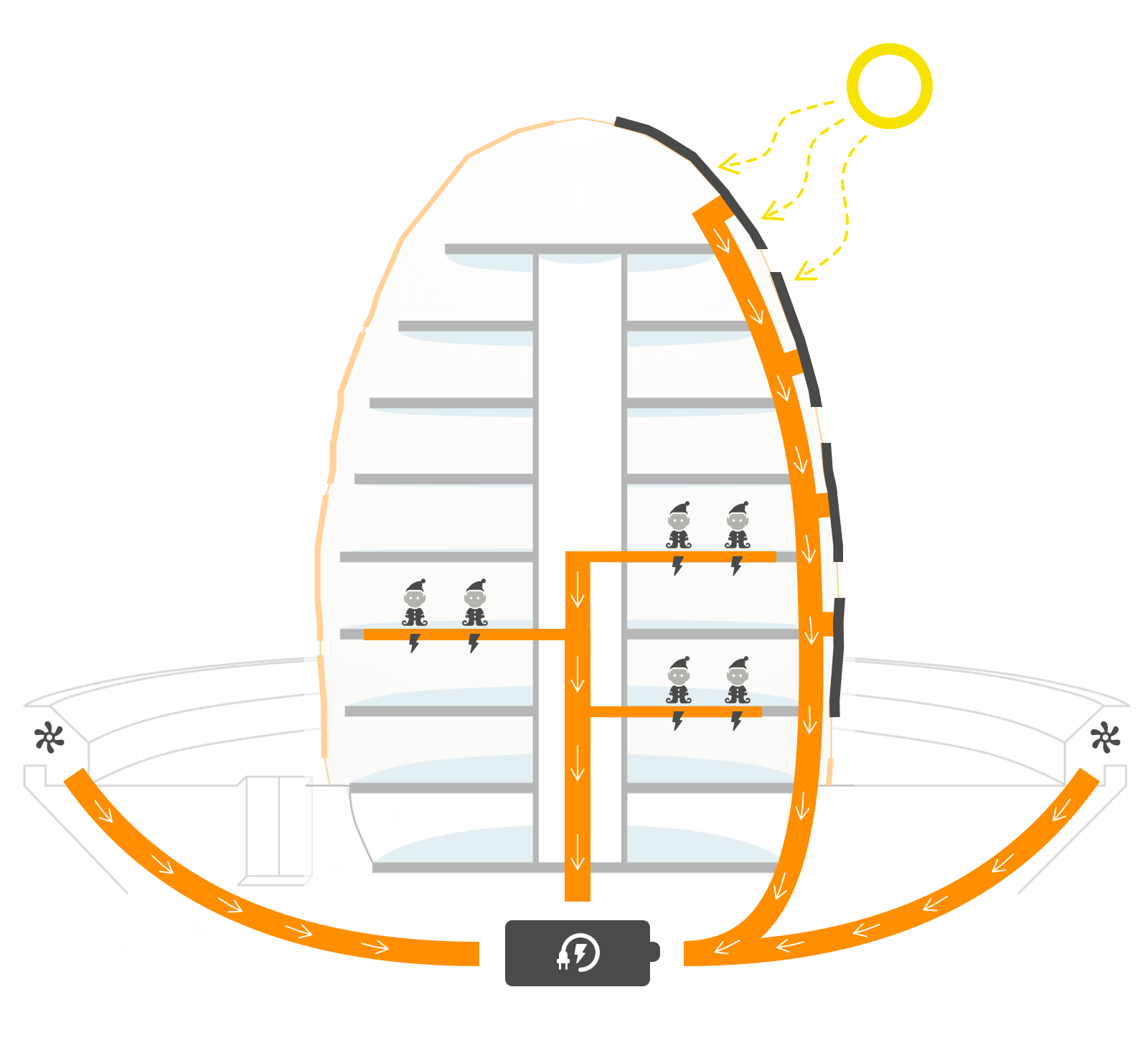 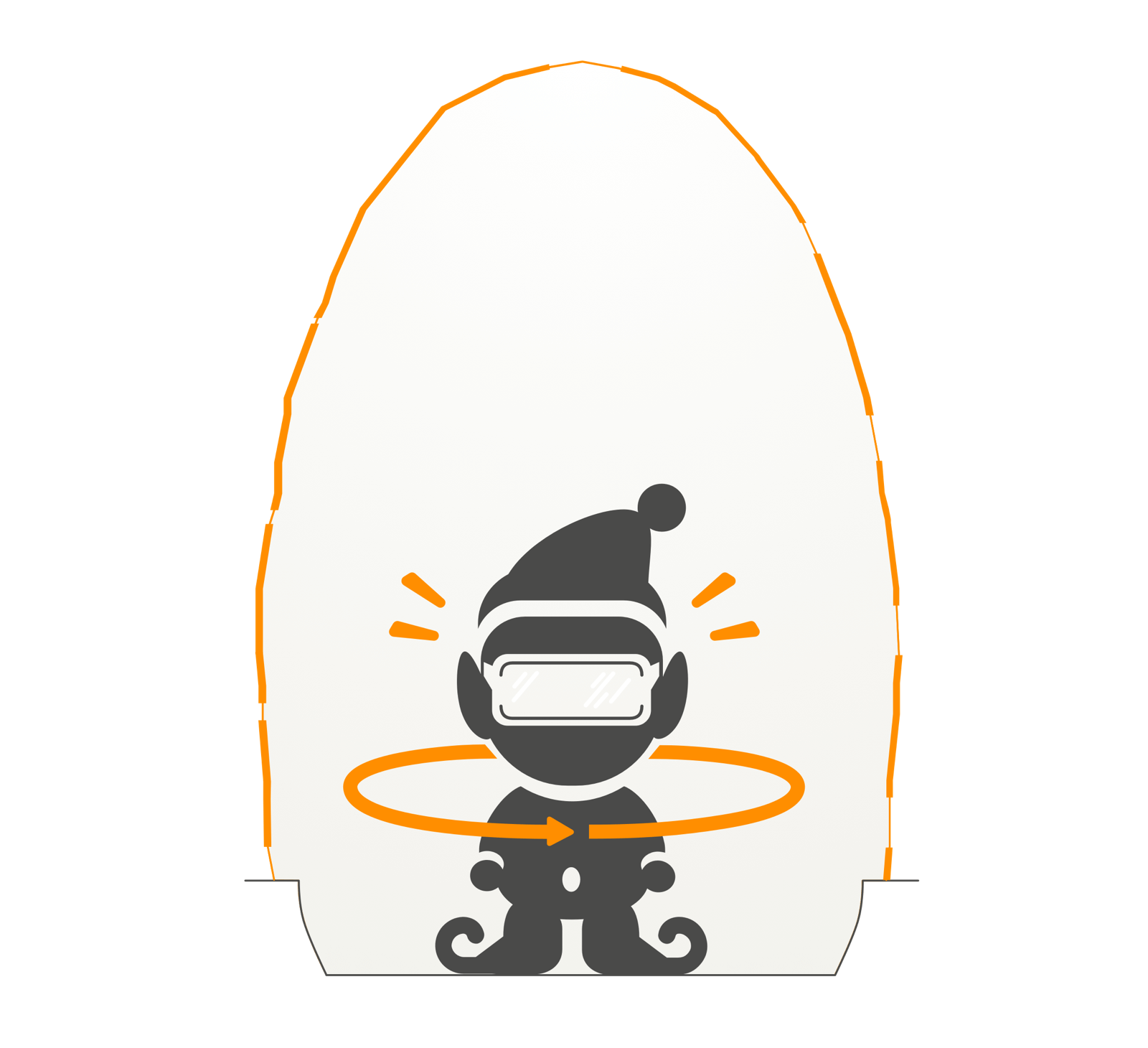 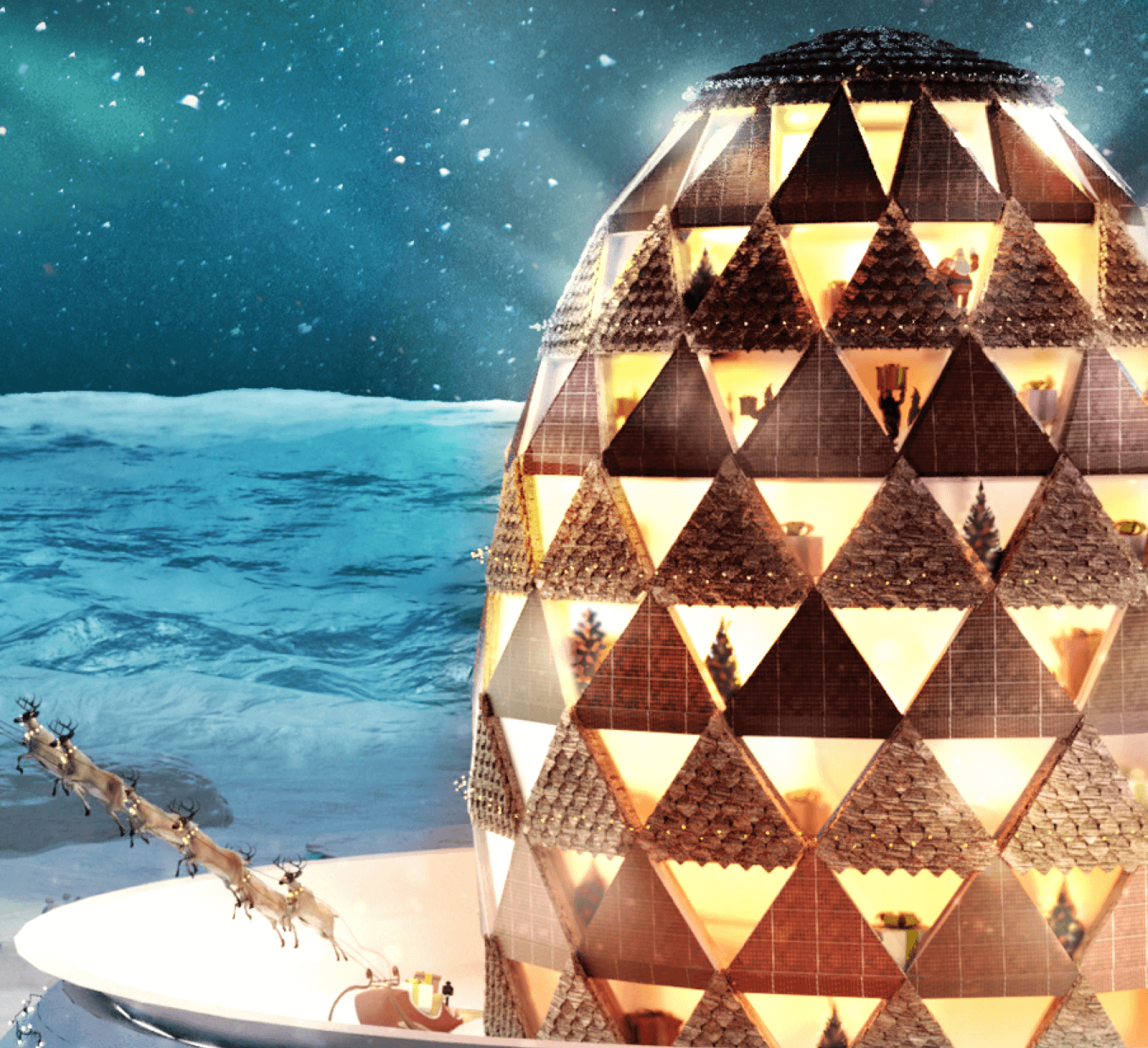 Santa's functions are gathered in a compact building and the shape is inspired by nature and more specifiacally; the form of a pinecone. The circular shape reduces the façade area and the materials used for it, resulting in a more energy efficient building, with minimal heat loss.

The building is situated at the north pole, in the middle of the floating polar-ice, where the ocean is several kilometers deep. The building foundation, was for that reason, made of an old concrete oil rig platform that can can keep the building afloat even if all the ice were to melt away.

The nine stories of the building accommodate all the necessary areas for Santa and his helpers. Santa's family lives at the two top floors, while Santa's helpers live below the family. The gift workshop, the waste management facilities, the rice production and the reindeer stables are beneath the residencies. The building's power plant, heating plant, ventilation system and other technical equipment are all placed in the basement.

The main construction is made of timber and consists of a main core (where the staircases are placed) and a diagrid. The triangular diagrid structure has been chosen since there is a lot of wind at the North Pole and it can distribute the wind loads evenly. The circular shape of the building itself leads the wind around the building, without creating any turbulence.

The outer “shell” of the pinecone consists of triangular windows, wood shingles and red and purple colored solar panels.

The walls are insulated with 500 mm of sheep wool insulation. This is a natural product with an excellent insulation value that regulates moisture and can be returned into the material cycle.

Santa's previous house is disassembled and the old wood logs are reused to cover the new building's floors and inner walls.

How the wish lists turn into gifts

Wish lists arrive with the reindeers at the postal reception in the basement. The wish lists are transferred up to Santa with the elevator through the core of the building.

Gifts are put into production and distributed within the building by the red conveyor belts.

The ready gifts are sent to the basement and put into Santa's bag. The sleigh gets loaded with the full bags and is ready to fly.

The stairwell in the core of the building has two separate stairways functioning as ventilation shafts; one for the supply air and one for the exhaust. The air is consequently lead evenly into the room through sub-floor vents. The return air is withdrawn through a central exhaust placed at the walls of the stairwell. Exhaust air is led out of the building through panels in the platform.

The simplicity of the ventilation system of this building leads to a minimal use of ventilation shafts, components and materials which results to lower embodied greenhouse gas emissions.

The temperature at the North Pole can be as low as minus 50 degrees Celsius. Heating the outdoor air can therefore be highly energy demanding. The ventilation system includes two rotary heat exchangers with a combined temperature efficiency of 95%. This means that only a small amount of additional heat is needed which is delivered by the heat pump via a heating coil.

Santa's family likes it when it is warm and cozy inside

The heating plant is placed in the basement. A seawater heat pump is used to heat tap water, ventilation air and run the the biogas reactor. The production facilities of the building are only heated by the ventilation system, while the living quarters are equipped with biogas fireplaces and waterborne underfloor heating.
The heating plant consists of:

The building is equipped with a heat pump that collects heat from seawater in the depths below the ice. Only one third of the heat produced by the heat pump is therefore from the locally generated electricity. The heat pump is based on a natural refrigerant that does not affect the ozone layer, and has minimal effect on global warming.

If the temperature of the ocean is too low, the heat pump is automatically turned off and the CHP-system kicks in.

Wastewater from the toilets and reindeer manure are gathered in a container and treated. Along with food waste, it all is sent to a biogas reactor. The reactor produces biogas and a biproduct that can be used as a fertilizer for the buildings rice field.

The biogas is collected and stored in a container. When there is a need for heating, the gas fires up the CHP-facility in the basement and the fireplaces in the living quarters.

The CHP-system is a combined heat and power generator, which maximizes the utilization of the biogas. This is used to heat the air, while the power can be stored in the building's battery bank.

The North Pole experiences as little rainfall as a desert would. Freshwater is therefore valuable!

The North Pole is surrounded by seawater that is non-potable, and Santa does not want to use the already melting polar ice. There is also very little rainfall throughout the year. The amount of rainfall is so low that the Arctic is considered the world's next largest desert after Antarctica. The solution is to produce clean water from the seawater beneath the ice.

The building has a constant access to freshwater through the so-called Watermaker-technology, which is often used at larger vessels and oil rigs. This systems collects seawater and purifies it through reverse osmosis. In the summer, the energy surplus from the solar panels can be used for the process, and purified water can be stored for later use. This system supplies enough water to Santa and Santa's family, the helpers, the reindeer as well as for the food production.

The ice at the North Pole reflects 60-80% of the sunrays and therefore plays an important role in preventing the ocean from overheating.

Considering that the process of obtaining potable water is energy demanding at the North Pole, it instantly becomes important to utilize every drop of it. That is why several water saving measures are implemented.

Wastewater from sinks, showers and washing machines is treated and reused. In the living quarters, the treated water is used for toilets and watering the rice crops. In addition, all faucets are touchless, reducing the total water consumption.

While a shower is being taken, the gray water is pumped from the drain, it is treated and once it is ready for reuse it is heated and distributed back to the showerhead. A sensor measures the quality of the water for proper follow up and to ensure that the water stays clean. This solution reduces the shower water consumption by approximately 90%.

The North Pole stays in full sunlight throughout the entire summer, while it is dark for several months in the winter. In order to utilize the full potential of daylight, the windows are placed in the triangles with the largest area on the top. In this way, the glass lets in a lot of daylight, which reaches deep into the building. The lower part is equipped with solar blinds, while the top glass area has integrated acrylic slats. The slats utilize lower angles of sunlight by reflecting the light through the ceiling into the room, which reduces the energy consumption for lighting.

A smart building for a smarter Santa

There is no power grid at the North Pole. Thus, Santa needs to be self-sufficient when it comes to electricity. This is achieved by using the power of wind, sun, the CHP-facility (combined heat and power) and the movement of the helpers (foot power).

When the electricity is not used immediately, it is stored in the building's battery bank, which consists of reused batteries from scrapped electrical vehicles.

The floors of the gift factory facilities are equipped with a power generating floor coating, which converts kinetic energy to electricity. When Santa's helpers are dancing, each step creates a small amount of energy that is further used to power the building's sensors and antennas.

The buildings LED-lighting is based on Power over Ethernet (PoE). Each source of light gets power through network cables, reducing the amount of copper cables needed and allowing for individual control of each light source. Motion detectors turn off the light when no one is around and hence keeps the energy consumption low.

The indoor positioning system is used to locate Santa's family, helpers and reindeer and is based on Bluetooth Low Energy (BLE). The BLE uses battery-powered antennas that do not need any external power sources.

Artificial Intelligence ensures that the elves are assigned a new work station each day to avoid repetitive tasks.

The Internet of Things (IoT) means that all the systems are connected to the internet. The data collection provides fantastic opportunities to optimize the operations and adapt the production and tasks to the actual needs.

All the connected components can be utilized in a 3D digital twin model of the building that contains real time information as well as documentation of the different buildings elements about the maintenance and operations. This information makes it possible to detect problems at the component-level when they arise. The twin model together with a central operations facility and a prediction-based maintenance system that is based on machine learning makes the task of operating and maintaining the building easy.

This Christmas, Santa made a sketch to his helpers (Christmas tree pyramid) that sums up the circular economy principles and shows the priority order of the actions regarding waste management and resources (it's read from top to bottom).

Circular economy concerns generating the least possible amount of waste, and everything that can be reused or recycled should go back to the system in a closed loop. This is important for avoiding natural resource depletion.

Waste reductionThe toys that are repaired are not sent to a landfill but are repaired at the workshop.ReuseMaterials and textiles are reused and upcycled into new toys.
RecyclingWaste management and recycling is managed in the waste room where waste compactors and recycling stations convert most waste types into new materials. The rice plants get their nutrition from the compost and manure generated in the building.CombustionAll non-recyclable materials (residual waste) are used in the biogas reactor in order to turn waste into fertilizer. Excessive waste is compressed and turned into heating. No waste ends up at the landfill!

Ambition: BREEAM-NP Outstanding
BREEAM is a sustainability assessment method for buildings and BREEAM-NP is the adapted version of BREEAM to the North Pole's climate and surroundings.

In the BREEAM-NP's manual the chapter of land use and ecology is changed from outdoor ecology features to indoors due to the lack of plant and animal life at the North pole. The chapter on water includes a new topic on frost prevention and the chapter on transportation includes snowscooters and animals instead of cars and bicycles.

Ambition: Energy label A
The building's energy supply is below 50 kWh/m2 due to the well insulated walls and windows, as well as the high heat recovery efficiency of the ventilation. The electricity share that is used for heating is below 30%. The building is equipped with a liquid-to-water heat pump, a combustion facility and a fireplace with a water jacket fired with locally produced biogas.

The building sector represent about 40% of Norway's and the worlds energy consumption.